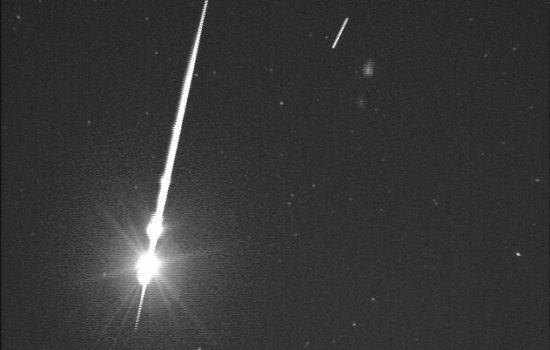 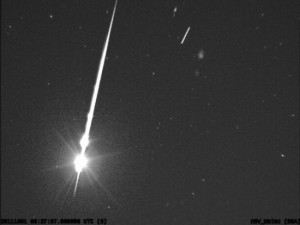 Source Space News: A NASA camera utilized to record meteor falling in the night sky caught a stunning picture of  meteor breaking apart while a piece of an old Russian rocket was passing overhead.

The space light show occurred Friday (Sept. 30) over NASA’s Marshall Space Flight Center in Huntsville, Ala., at about 8:37 p.m. EDT (0037 GMT).  A wide-field meteor camera, one of many in a network NASA uses to track fireballs, recorded the “spectacular meteor breaking up in Earth’s atmosphere,” according to a blog post by meteor scientist Bill Cooke,head of NASA’s Meteoroid Environments Office at the Marshall center.

A NASA video of the meteor’s fireball posted today (Oct. 5) shows the event. But the camera also recorded an extra surprise. “Also visible is a star-like object moving slowly toward the upper middle of the field of view — the upper stage of the Zenit booster that launched the Russian Cosmos 2219 intelligence satellite back in 1992,” Cooke wrote. “Orbiting 500 miles above Earth, this empty rocket body can get bright enough to be seen with the unaided eye.”

You can read  the original article on Space News. You can also read how  meteor shower can pose in danger orbiting spacecrafts.