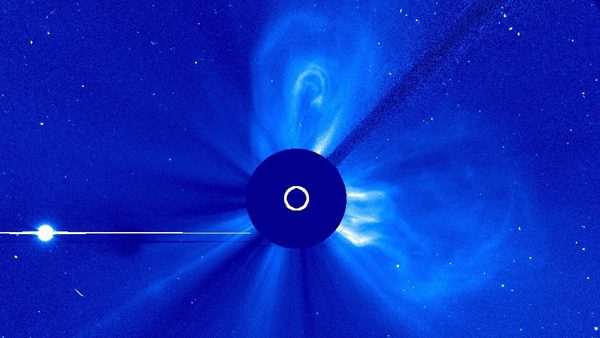 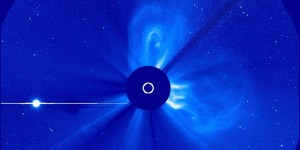 A Mercury-directed CME emitted from AR1719 as recorded by the Solar and Heliospheric Observatory. The Bright dot opposite the eruption is Venus (Credits: NASA/ESA).

The two coronal mass ejections (CME) emitted April 20 and 21 are not headed towards Earth, but they might affect operations of NASA’s Messenger satellite and STEREO-A, one of a pair of solar observing satellites, as they shoot straight for Mercury. In the meantime, the Earth-facing sunspot region AR1726 which only made an appearance on April 19, has now swollen to a massive 150,000 km in diameter  – equivalent to several dozen Earth diameters. NOAA’s Space Weather Center now predicts a 40% likelihood of Earth-facing M-class solar flares as a result.

Here is a 48 hour video from Solar Dynamics Observatory of the growing AR1726: