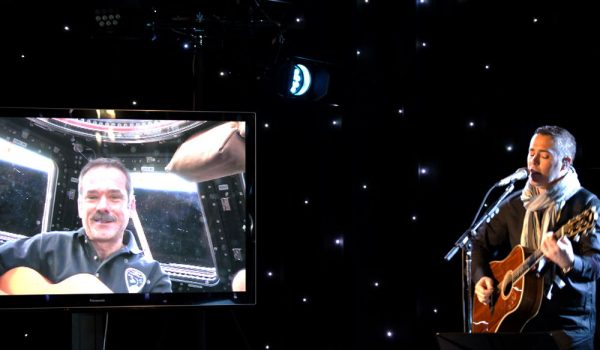 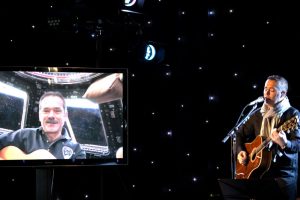 On February 8, the multi-talented Canadian astronaut Chris Hadfield performed a duet from space with his long time friend and front man of the band Barenaked Ladies, Ed Robertson. The second space-Earth duet in history, Friday’s performance was the first to feature release of a new song. In this case, the song had been jointly composed by Hadfield and Robertson during Hadfield’s mission training.

Both Hadfield and Robertson performed on guitar and took turn on vocals, will backup from Wexford Gleeks youth choir. Hadfield used a guitar pick designed to match his mission patch. With remarkably lag-free transmission from ISS, Hadfield did his best to show off all ISS has to offer, recording from the Cupola with frequent glances out at the orbital scenery, and spinning his guitar in the air to demonstrate microgravity. Apparently, guitar playing in space can be a tad challenging: Hadfield has reported that with the absence of the instrument’s weight, he’s had to relearn how to fret.

I.S.S. (Is Somebody Singing) is Hadfield’s second recording from space, following Jewel in the Night. Report has it he is trying to record an album’s worth of song during his mission.