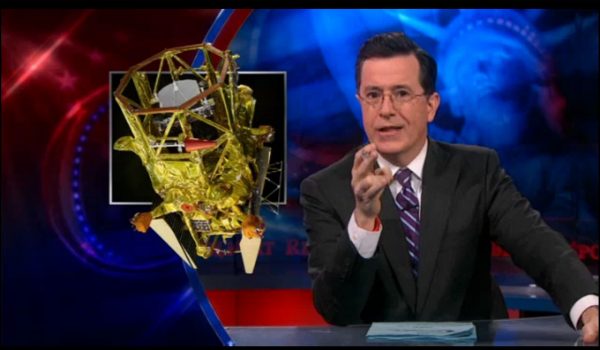 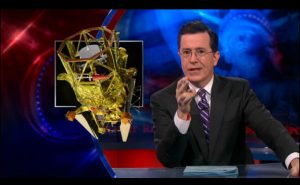 An image from Colbert's segment on Phobos-Grunt. (Credits: Comedy Central).

Public awareness of space debris concerns has increased dramatically over the past few months due to several high profile reentry events, including the UARS reentry in September, the ROSAT reentry in October,  and the December residential impact from a failed Soyuz launch. With the extended saga of the failed Phobos-Grunt probe about to end with its impending atmospheric reentry, space debris has come to the attention of high profile comedian Stephen Colbert.

On January 11, The Colbert Report ran a segment on the reentry of Phobos-Grunt. “Now it turns out that the sky might actually be falling…and it’s all because of the falling Russian spacecraft,” says Colbert in the segment. Calling the probe a “molatov cocktail of death,” Colbert went on to highlight safety concerns with reentry of Phobos-Grunt’s full load of fuel – with a satirical twist: “Hydrazine as you may know is highly toxic, extremely unstable, corrosive to the skin and exposure can lead to pulmonary edemas, seizures, comas, or death. So in Russia they use it to water down their vodka.”

The Colbert Report is a nightly news parody that runs on Comedy Central in the United States. Although satirical in nature, it is increasingly used as a primary news source, particularly by its core demographic of individuals younger than 30 years of age.

The show has demonstrated significant cultural impact since its 2005 inception. In the space arena, The Colbert Report participated in a 2008 online contest to name the ISS Tranquility node, resulting in the highest number of votes for naming the node “Colbert.” NASA rejected that option, but named a piece of exercise equipment aboard the node the Combined Operational Load Bearing External Resistance Treadmill – or C.O.L.B.E.R.T.

The Colbert Report segment is the latest media channel to spotlight space debris. An IMAX feature entitled Space Junk 3D, a documentary on orbital debris, released January 13. A fictional movie, Gravity, predicated on two astronauts being stranded after a piece of debris incapacitates their spacestation and featuring Hollywood heavy hitters Sandra Bullock and George Clooney, is due to release in November. The  recent frequency of space debris events is bringing debris to public conciousness to a degree not previously seen.

Below is the complete segment relating to Phobos-Grunt from Wednesday’s The Colbert Report: